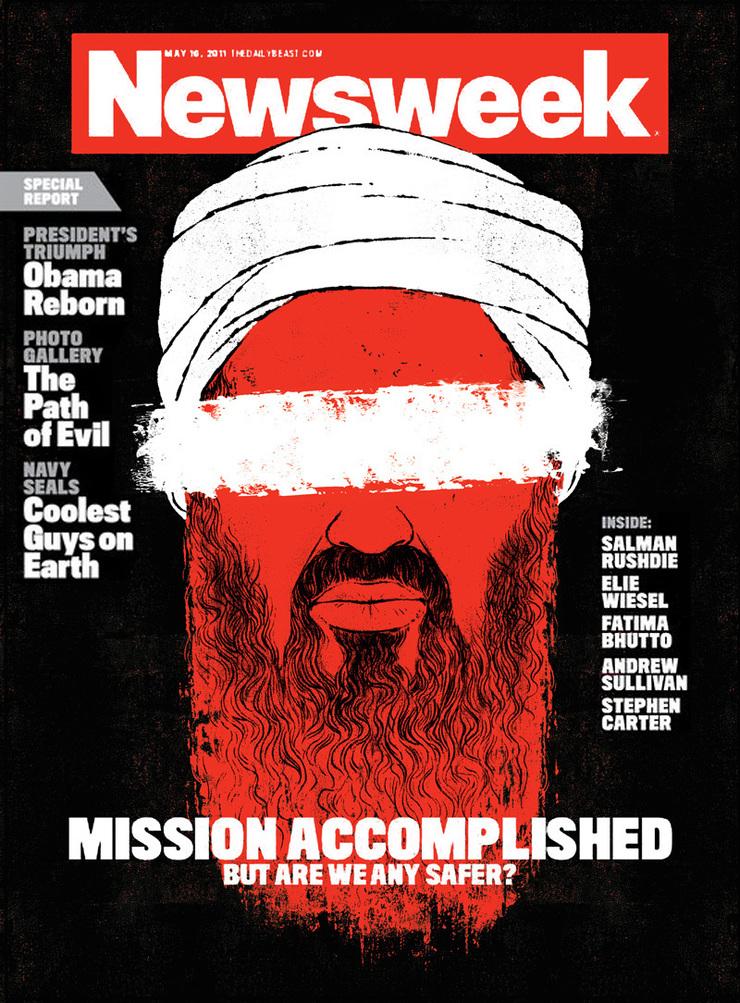 I had just settled in to work on some projects Sunday night when I heard the news that the president was going to make a major national security announcement.  My first thought was that there was a major threat of some kind.  I started scanning a lot of online and cable sources and slowly the news that Bin Laden had been killed came into focus.   Having worked at a news magazine for so many years, I had become a bit of a news junkie, so I stayed up until 3 or 4 am reading all the reports.
The next morning, Monday, I woke up a little groggy to a message in my inbox titled "Newsweek / Urgent / portrait commission", and wish I hadn't stayed up so late the night before.  The magazine was going to publish a Special Issue on the historic event and they needed the portrait the next day.
I immediately started sketching Bin Laden, trying to come up with an idea that would capture the moment.  While drawing his face from the reference photos, I instinctively painted over his eyes, and this ended up being the sketch that made it to the cover.  Some of the sketches and details of the process are below.
I worked in Manhattan the days after 9/11.  I still remember the smell of smoke that lasted for days, maybe weeks, and the strange feeling that something worse could come down upon the city at any time.  I was working on this cover nonstop for the last couple of days, so the sense of history hasn't hit me.   Maybe I'll look back on it someday and the moment will make more sense.  The one thing I am proud of is that I'll be sharing the newsstand with my good friend Tim O'Brien's TIME cover.  That, for me, is a nice personal moment, great that both newsweeklies will have art on the cover by artists who have known each other for so long.
Thanks to Newsweek editor Tina Brown for her support of my work over the years, Design Director Dirk Barnett for the assignment and sharp cover design, and art director Lindsay Ballant for all the help along the way. 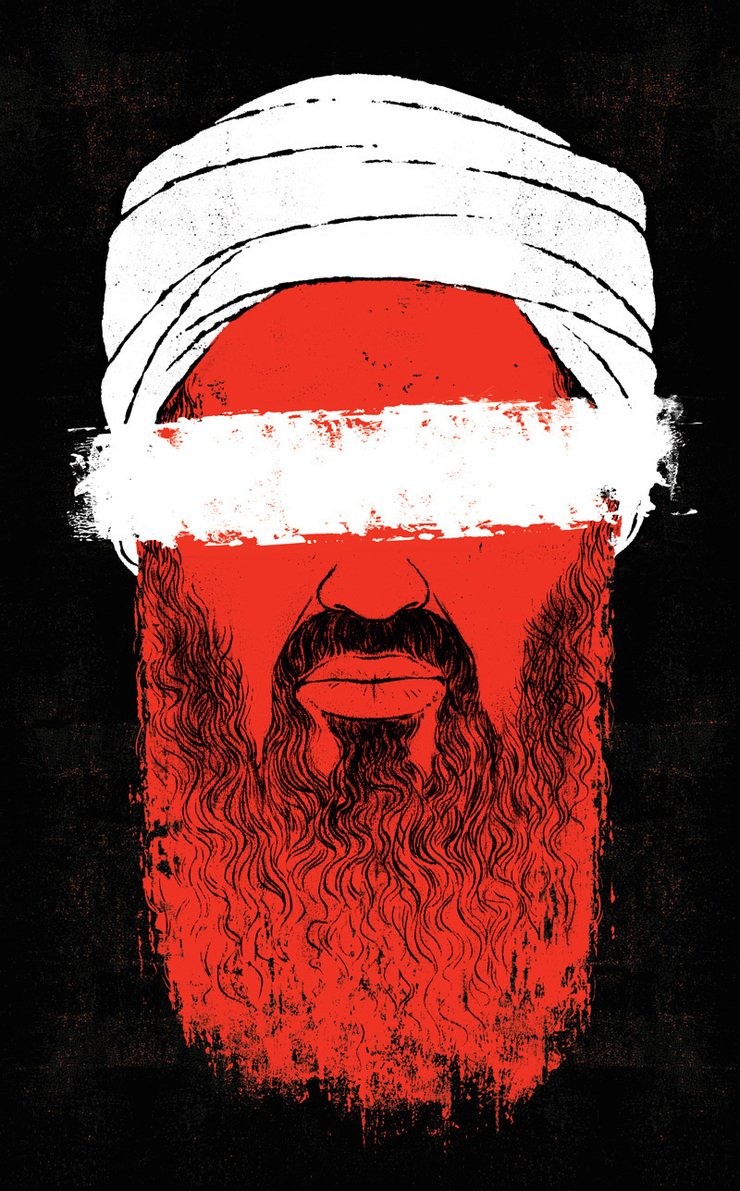 On Meet the Press:

Visit msnbc.com for breaking news, world news, and news about the economy 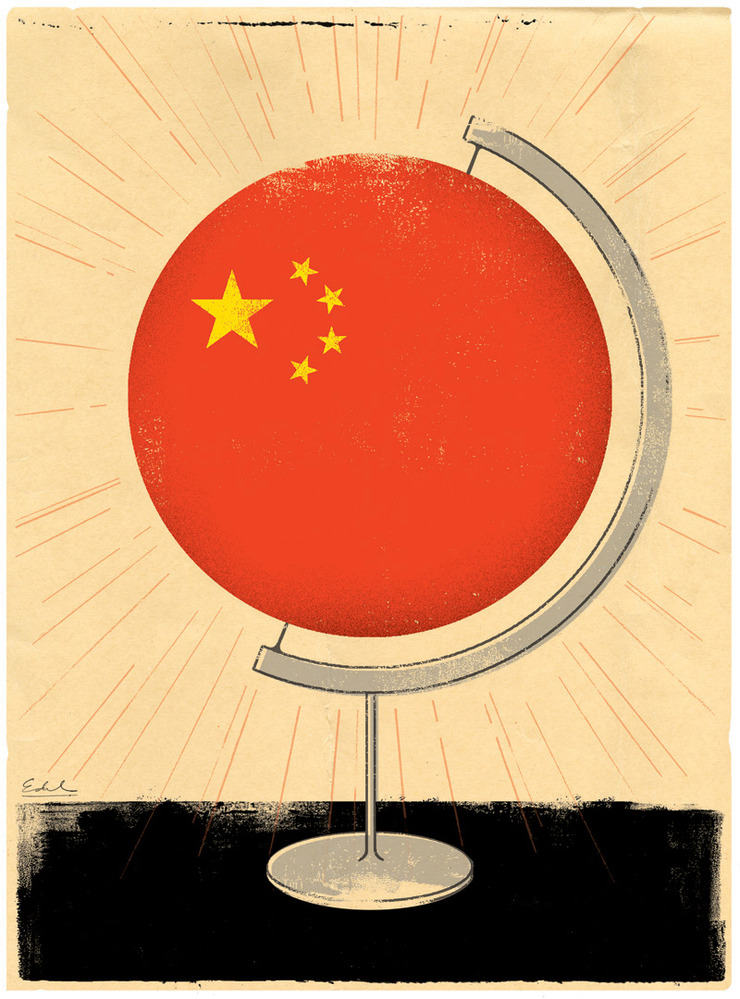 This is a series of illustrations in this week's Newsweek magazine.  I got the call last Wednesday from art director Leah Purcell to do five illustrations for an article about China's new world dominance.  All the art was due on Friday.  Once I figured out the opener image above, I decided to mirror the round shape of the globe on all the following images.  Each subsequent image was supposed to illustrate China's rewriting of the rules in four separate areas—trade, technology, currency and world climate.  I had fun figuring it out and like how the circular shape makes for a cohesive series.   The article is titled "It's China's World We're Just Living in It" and is online here. 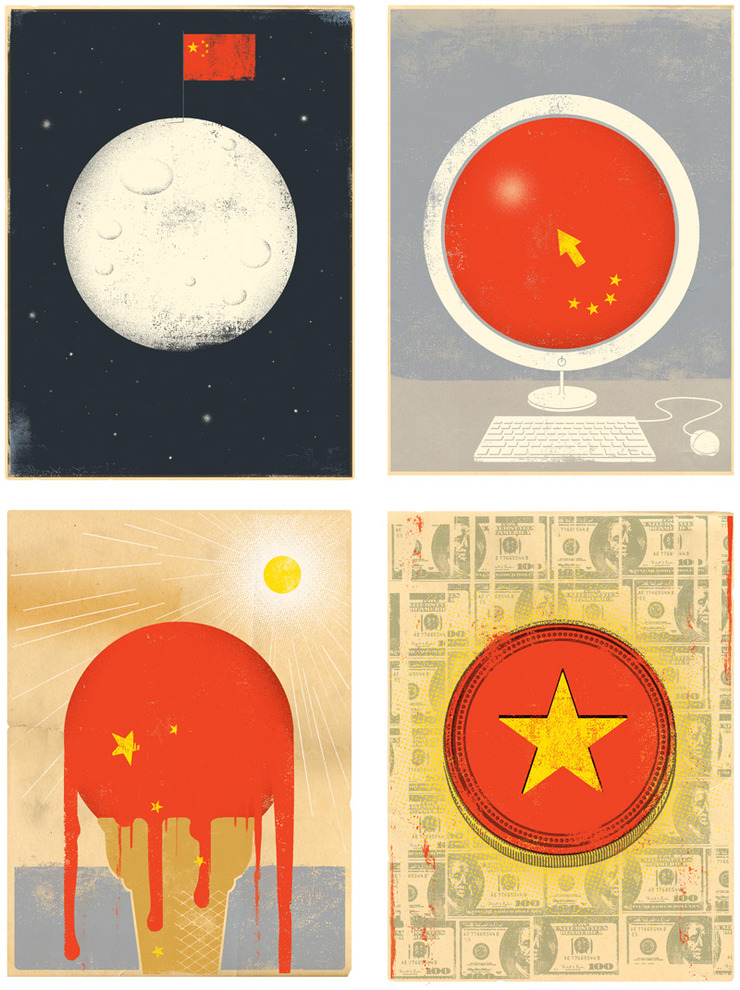 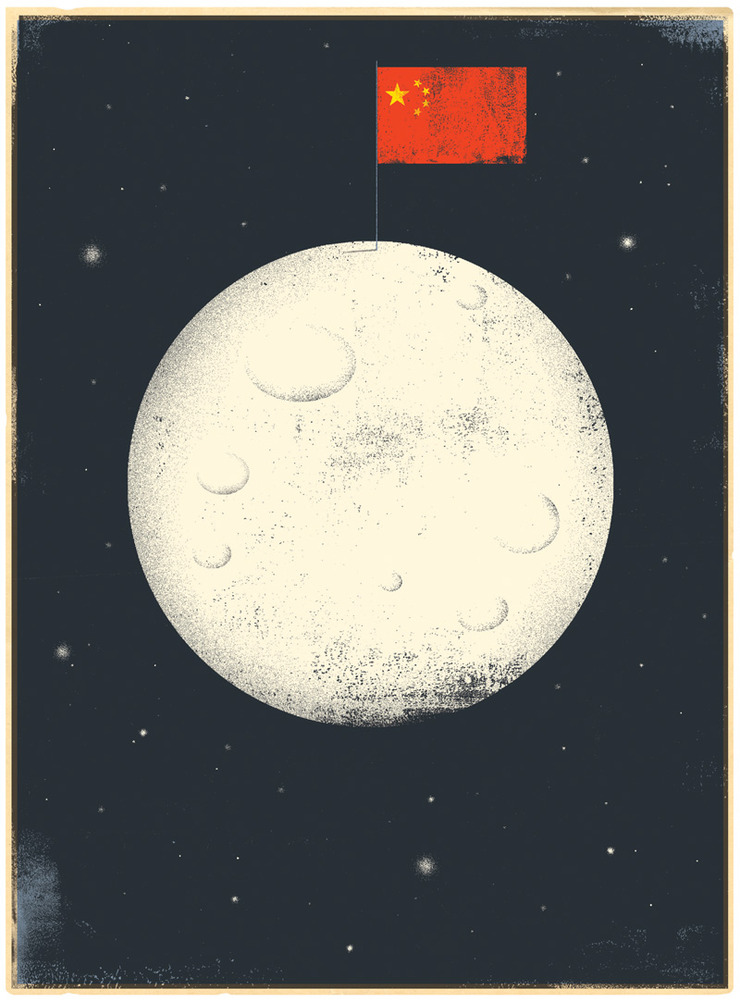 "Earlier this month China confirmed plans for its second unmanned lunar probe in October and the 2011 launch of a space module for the country's first docking exercise, all leading up to a 2013 moon landing. With NASA's budgetary rollback, China is now the only country making major investments in space exploration." 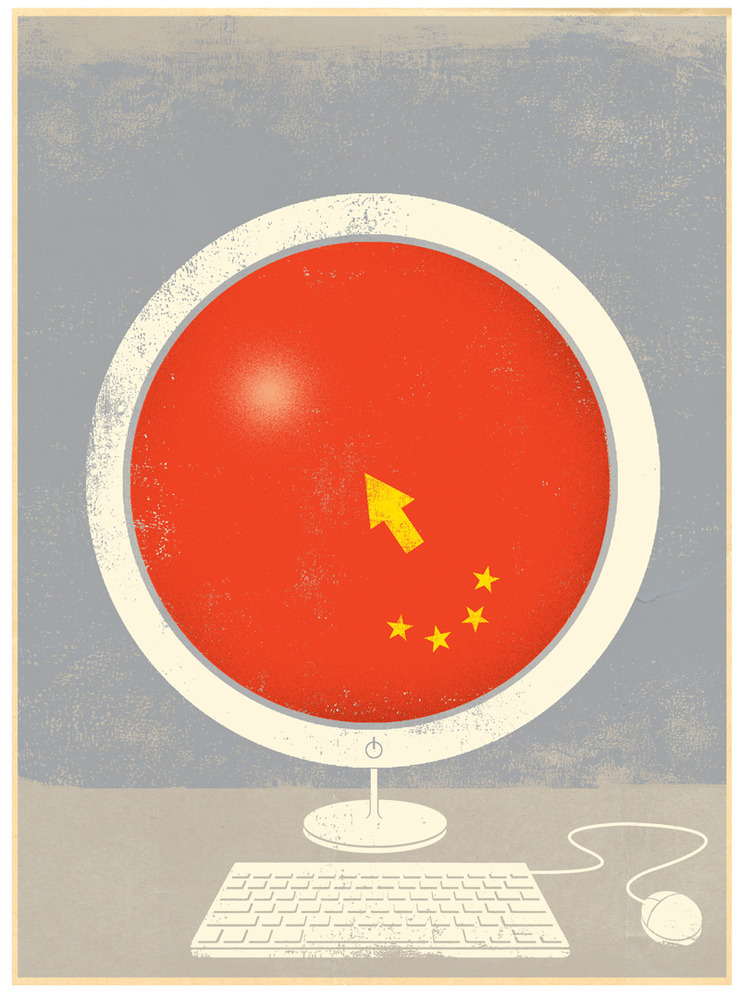 China rewriting the rules of the web and technology by censoring websites and being involved in cyber spying. 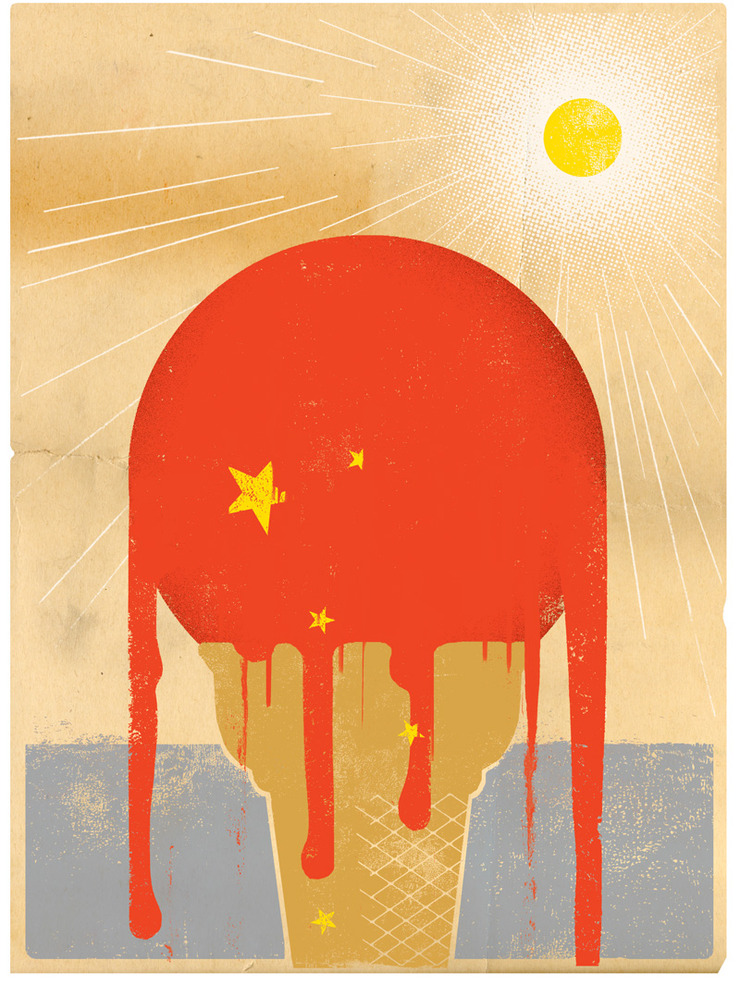 China has a horrible record on the environment but is actively involved in setting new international environmental standards. 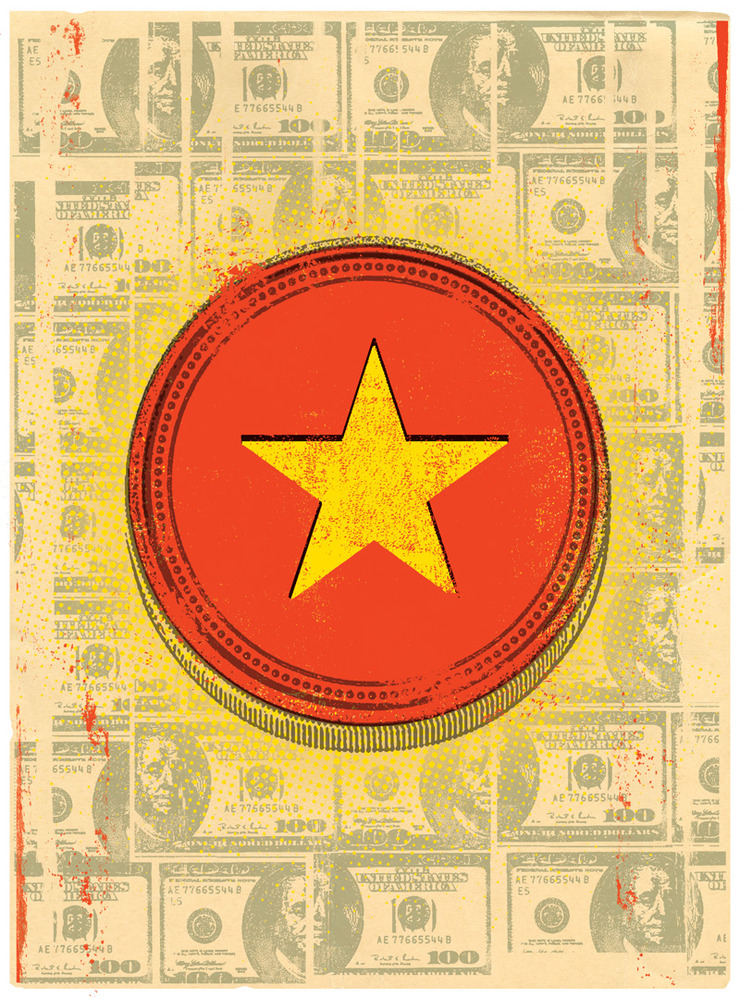 "Beijing's efforts to push the yuan as a rival to the dollar are now making tentative progress. In the last few months, China has inked $100 billion in currency-swap agreements with six countries, including Argentina, Indonesia, and South Korea"
permalink | comment
Topical: NEWSWEEK  EDITORIAL