A video about my Sergio books

I was interviewed about my children's books, the video is up on at Amazon.com and number of other places around the web.  I discuss how I write and illustrate my books and some of the ideas behind them.  I never feel comfortable on camera, I don't think anybody does, but I try!  Click the embed above to view. 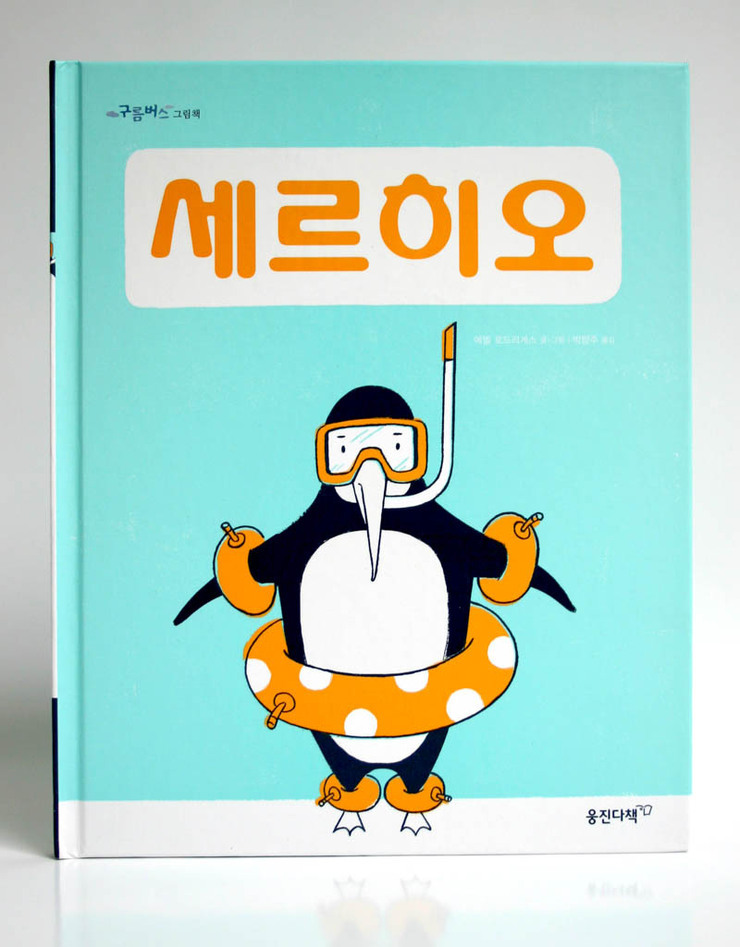 One of the neatest things for me has been seeing this little book embraced by foreign publishers.  The first book is just coming out overseas and I'm getting copies from the publishers.  Above is the Korean cover, below are the Dutch, Korean and French editions. 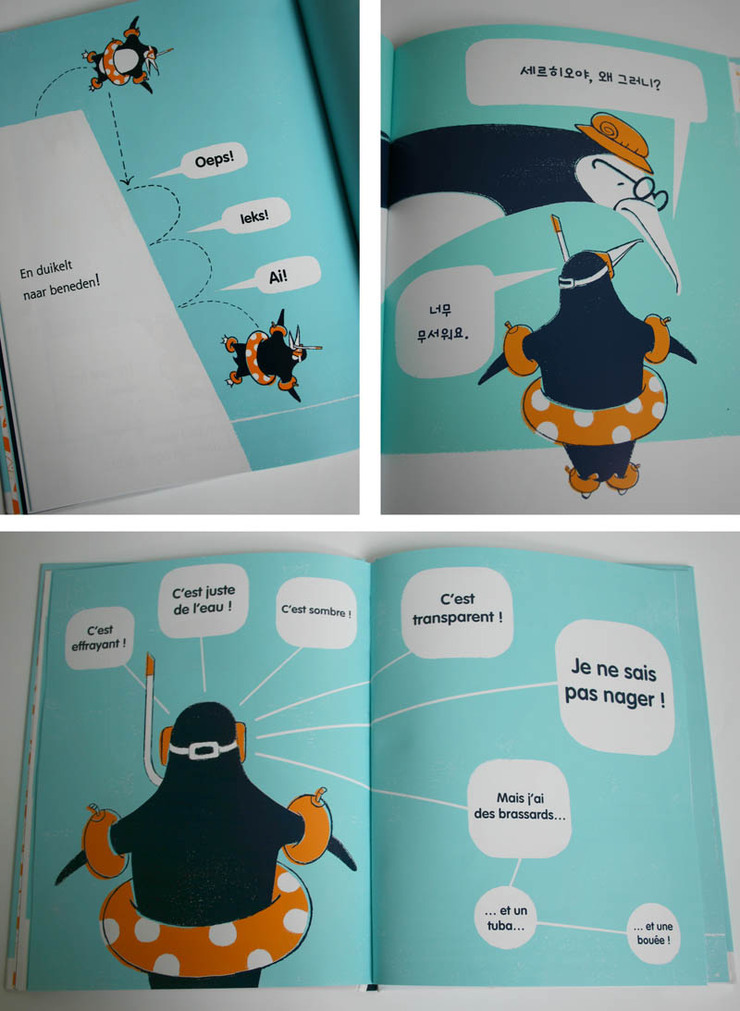 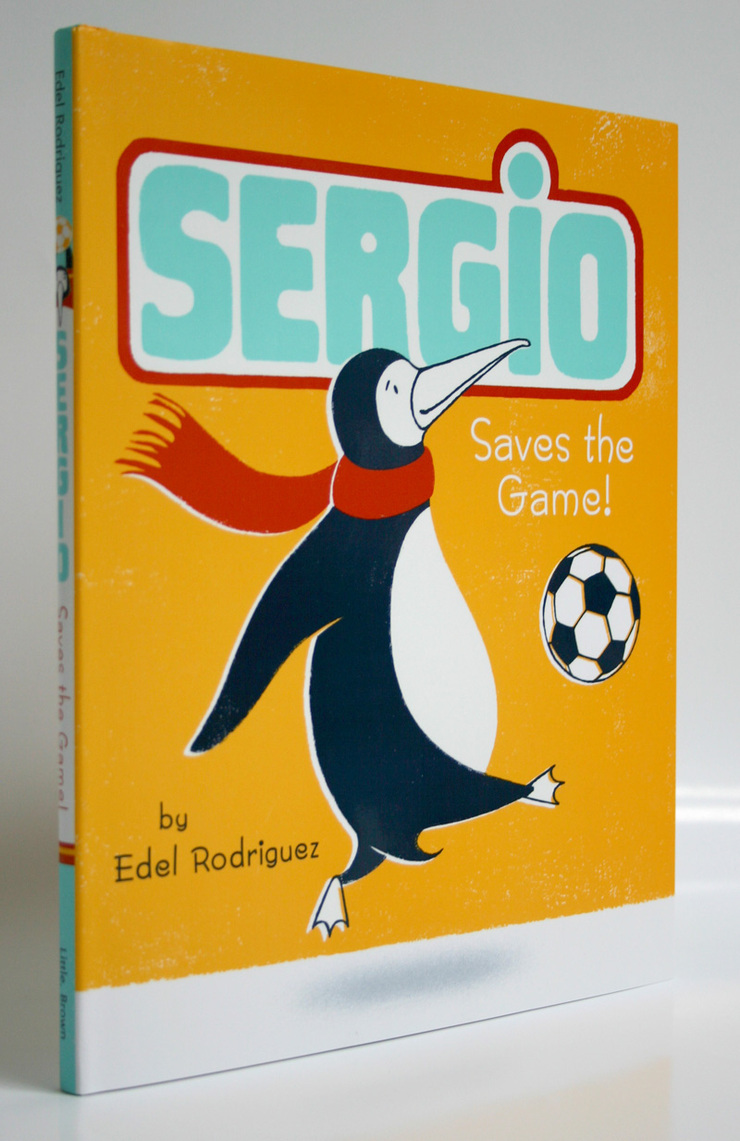 My new kids’ book Sergio Saves the Game! is now available here at Amazon.com and through local bookstores.  This book is a follow up to last year’s Sergio Makes a Splash!.  Below are some of the spreads from the book, several reviews, photos from recent events, along with a few preliminary sketches.  The book is both a Junior Library Guild and Book of the Month Club Selection and will be published in several languages by international publishers.  Many thanks go out to the great people over at Little, Brown, and Company, especially my editor Alvina Ling, art director PattiAnn Harris, and designer Tracy Shaw.   Thanks to my literary agents at Pippin—Holly, Emily, and Samantha, and to my family for all the help they provided while I worked on the book.   The book is 40 pages of action packed goodness.  Enjoy! 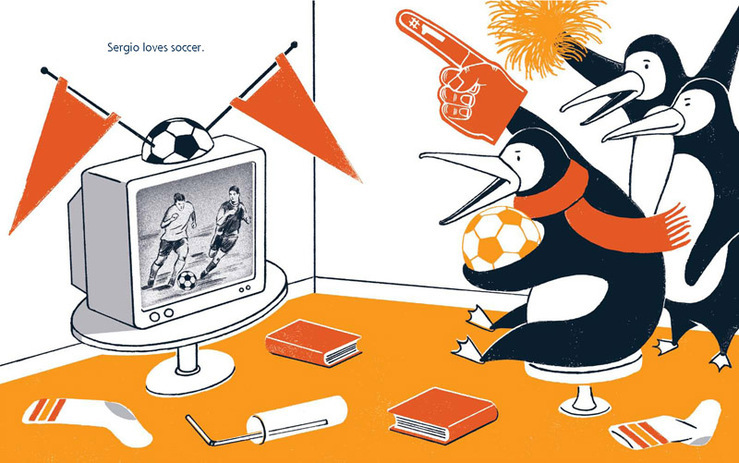 Publisher’s Weekly
"The sporty penguin of Sergio Makes a Splash is obsessed with soccer, but he's only “a true star” in his dreams. In real life, he “trips, falls, crashes, slips, slides, flips, sets, shoots ... and scores! For the other team.” But Sergio is determined to play and jumps at the chance to “try being the goalie!” The bold, graphic four-color spreads evoke vintage sports posters, and Sergio finally gets to shine during the championship game against a team of overconfident seagulls. Sergio and this smart sequel both deliver. Ages 3–6. (May) " 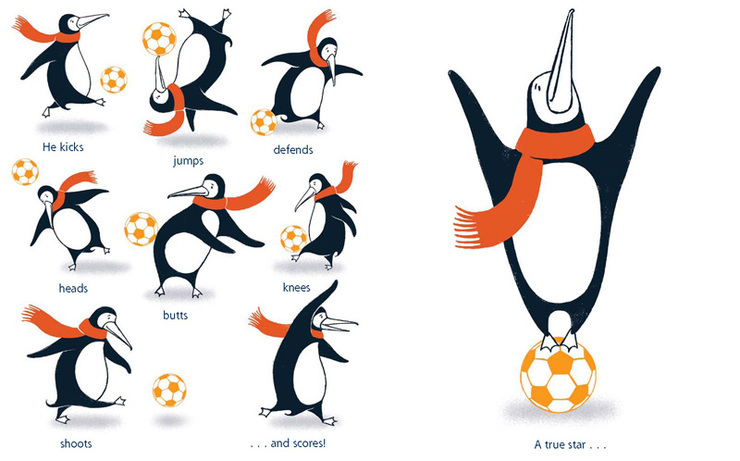 Doublex.com:
"Sergio, the little penguin who couldn't swim, splashed onto the picture book scene last year in Sergio Makes a Splash. This, the second Sergio book, is the rare sequel that is as good as the original. Perhaps this is because the author/illustrator chose a subject, soccer, that he and so many young children love. Sergio enjoys soccer and dreams of greatness, but he usually messes up. When he does score—oops!—it's for the other team. Consequently, he is always chosen last, and even with lots of practice he still feels tiny compared with the Seagulls, his team's huge and dreaded rivals. The woodblock illustrations, in lovely shades of wintergreen-gum-turquoise, apricot, red, and navy blue, have a classic feel yet a modern sensibility and a good deal of movement (rare with woodcuts). Sergio's determination is infectious, and young readers will have fun rooting for him throughout this uplifting underdog—underpenguin?—story. " 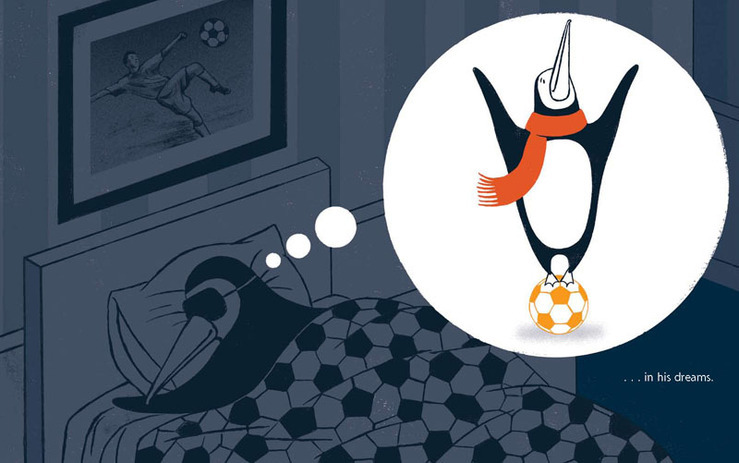 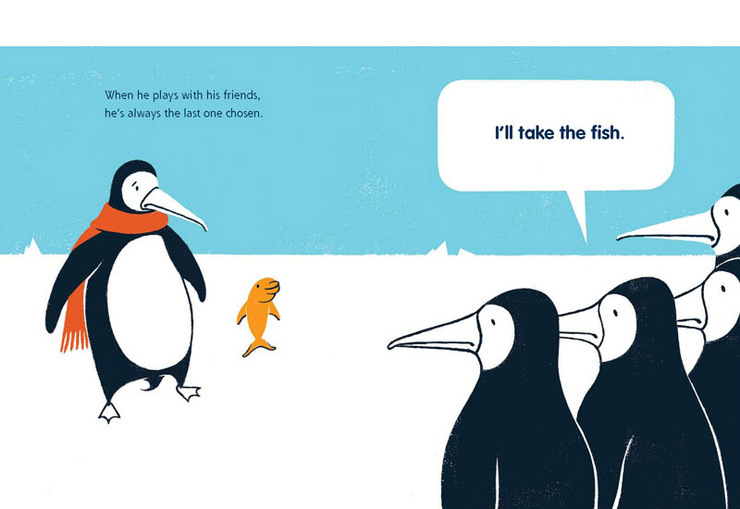 Junior Library Guild
"Vibrant artwork and clever visual jokes enliven this feel-good sports story. Author/illustrator Edel Rodriguez uses the same fun, bold palette of orange, navy, and aqua that he used in the previous Sergio title, Sergio Makes a Splash!, this time adding splashes of warm red for scarves and soccer jerseys. He also adds fun illustrative details such as ice cookbooks in the kitchen and a reappearing fish.
It’s especially nice to see the perennial “big game” story given such a fresh look.  Sports fans will appreciate the energy and action on these pages. Kudos to Rodriguez for making us believe that a round penguin with stumpy legs can dribble, juggle, and block, and for showing readers that you don’t have to do things like everyone else to be successful.
How does Sergio go from being a hopeless case who slips and falls (“It’s not you, it’s all this ice!” says his mother) to a pretty good goalie? “Practice, practice, practice,” as his coach recommends, and a willingness to get hit with the ball a lot. Eventually Sergio’s hard work pays off during the big game against the nasty, aggressive Seagulls. Rodriguez punctuates Sergio’s triumph with a hilarious image. It’s a fitting conclusion to this cheerful book." 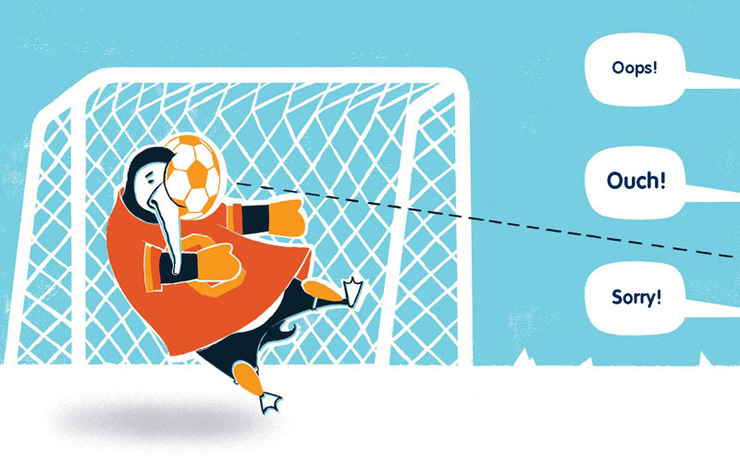 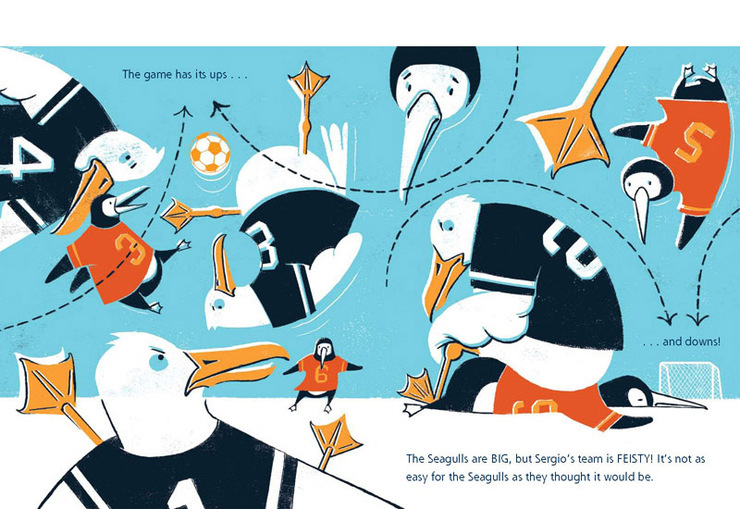 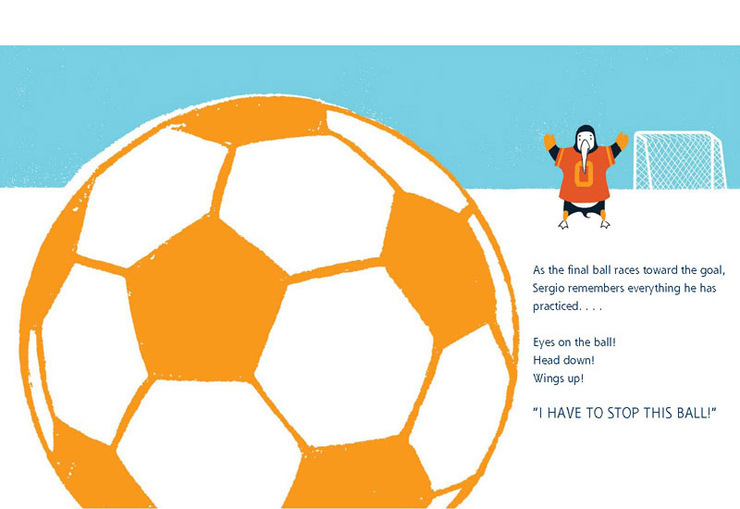 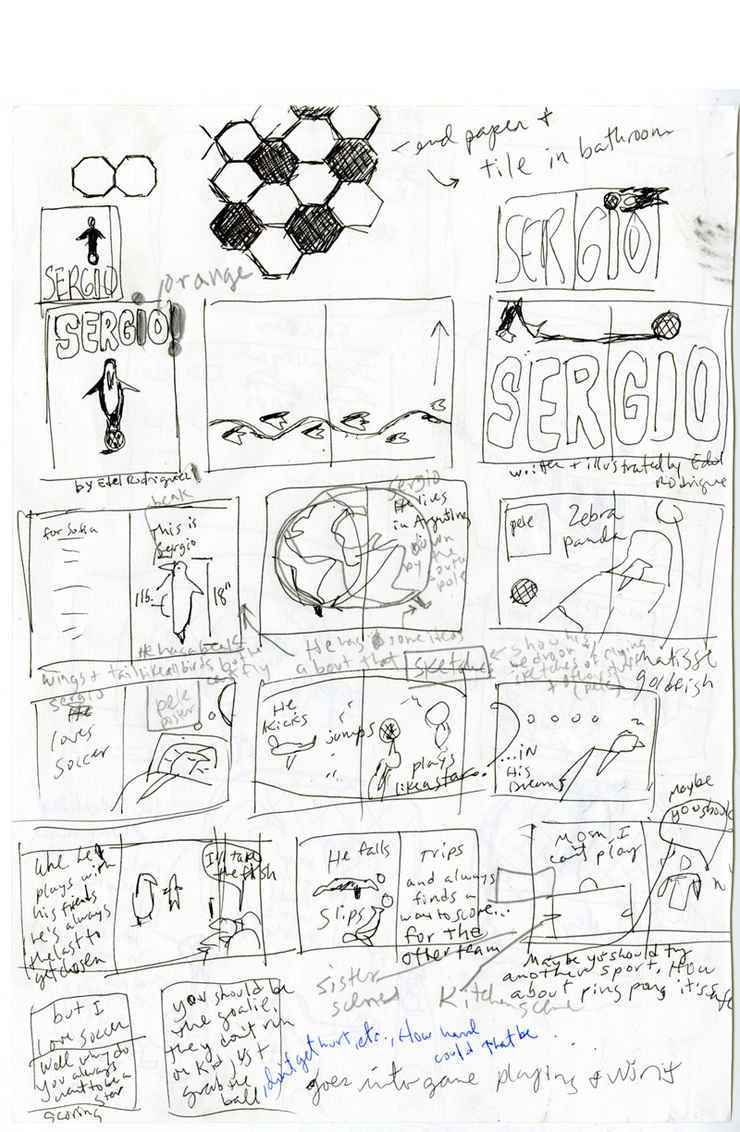 The first ideas for "Sergio Saves the Game!" came to me while on a plane trip to Brussels a few years ago.  These are the pages from the sketchbook I had with me at the time.  I usually don't write books as a manuscript separate from the art.  I tend to jot down the story and some of the visual ideas at the same time. This is sort of a rough storyboard that I go back to when I'm developing the book further. 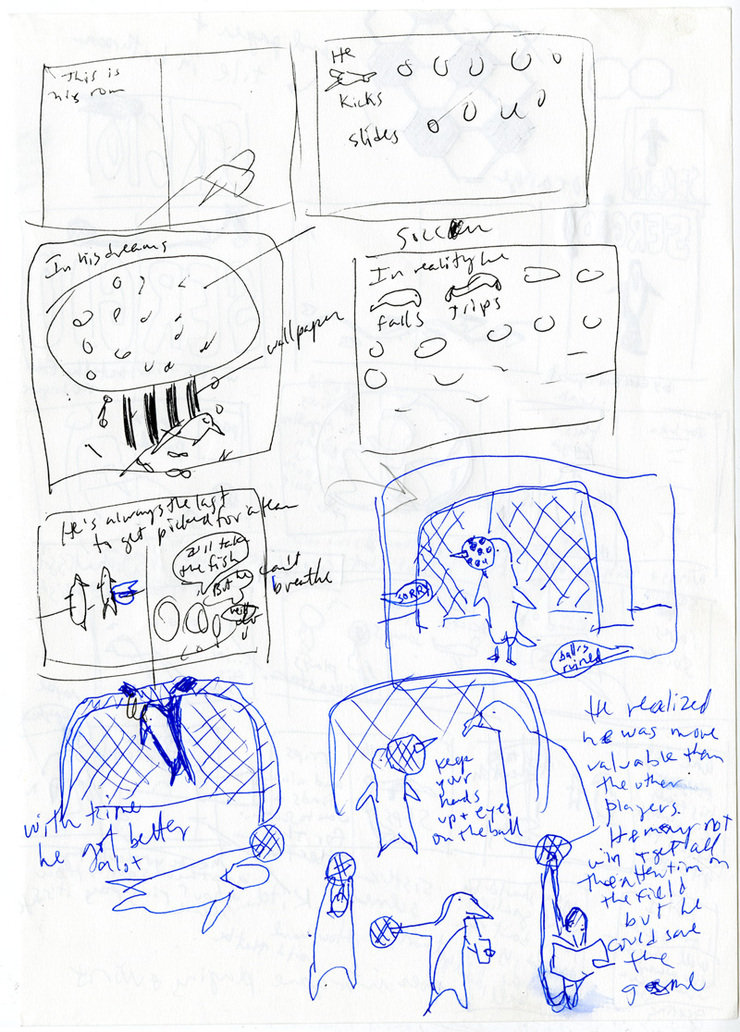 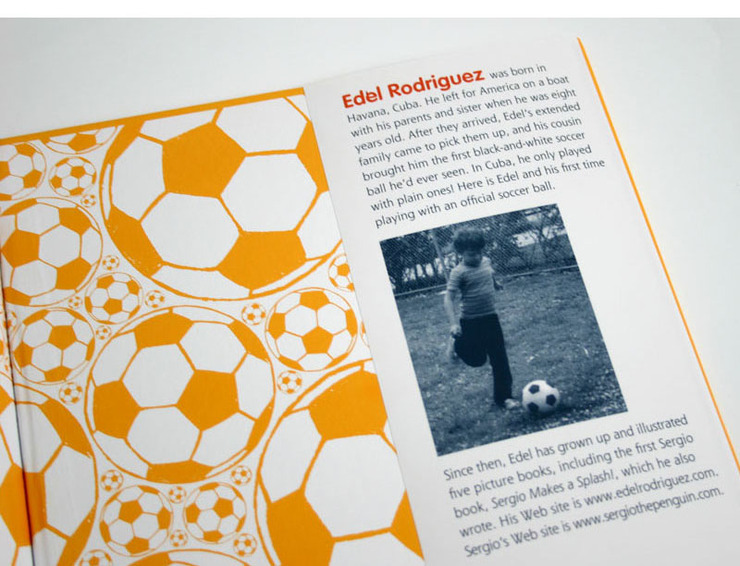 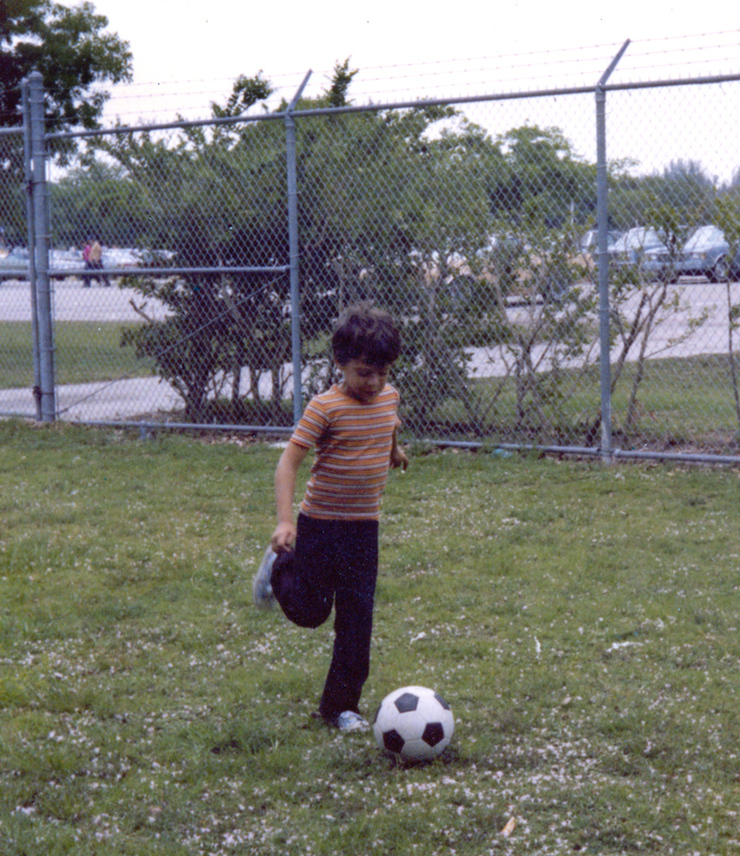 My editor asked me if I had any interesting soccer stories to add to my bio on the back jacket flap.  My first vivid memory of an official soccer ball was the one I saw on the first day that I arrived in the U.S. when I was eight years old.  In Cuba, I used to kick around whatever we had available, but I had never seen one of those crisp black and white patterned balls.  The image of the ball, along with many other new things I was given on my first day here (apples, tooth floss, peanut butter) stuck in my mind for a long time.  Above is a picture someone took of me at the INS processing center that day. 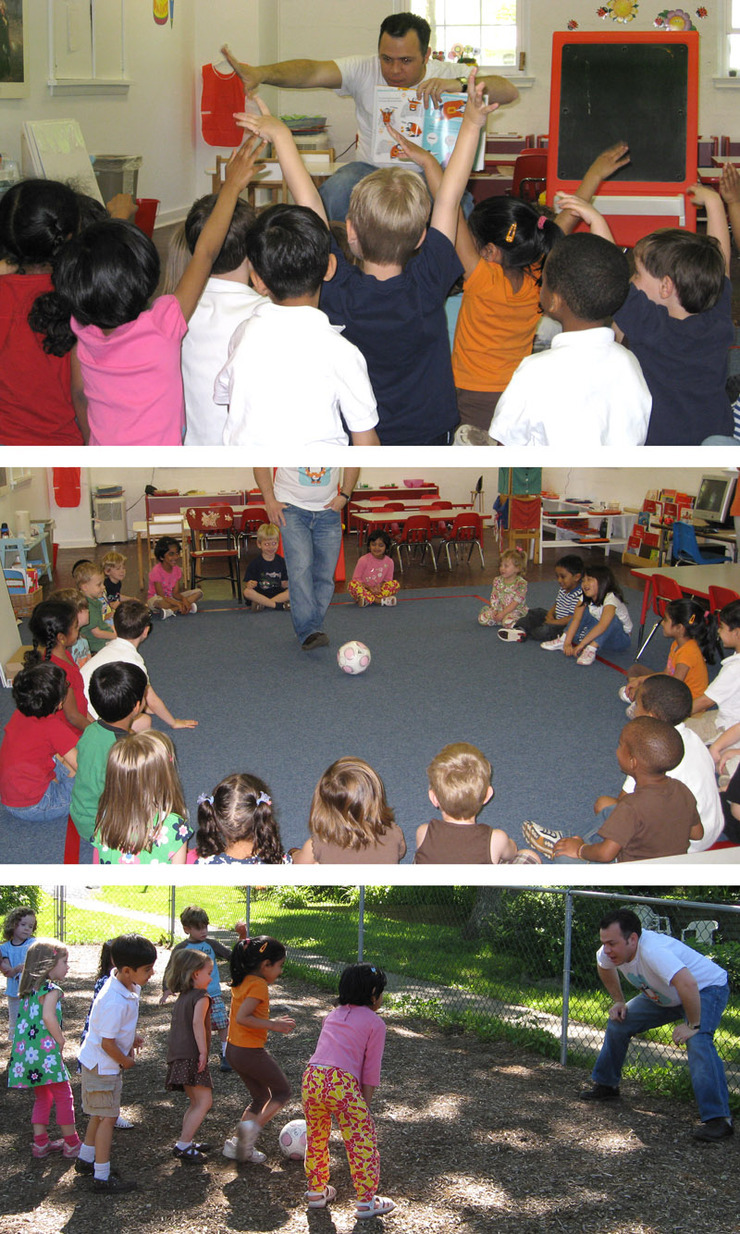 This week I read the book to my daughter's class.  It's always fun going to classes and trying to figure out what questions the kids will come up with.  The kids drew their own versions of Sergio (their drawings are below, they're so cool), we kicked the ball around the class, and went out into the playground.  Fun times!

Our friend Carrie Davis created a little program for the local Mom's Club based around the new Sergio book.  The pictures above are from her event.  I dropped by and read for the group of kids that had gathered. 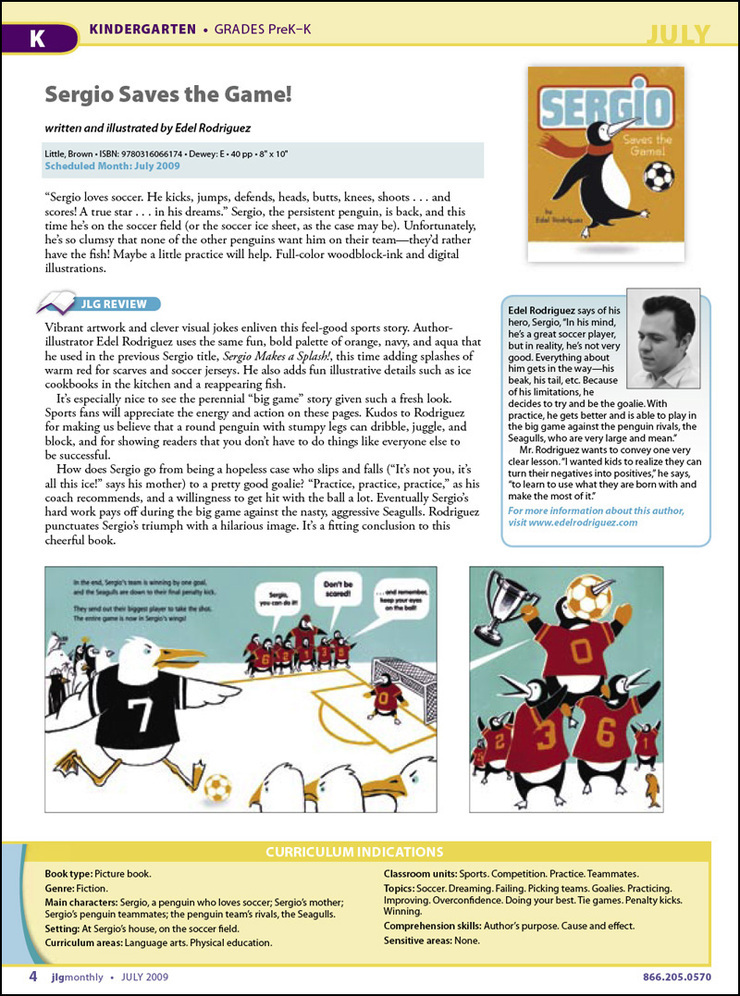 The book was featured in the Junior Library Guild Magazine. 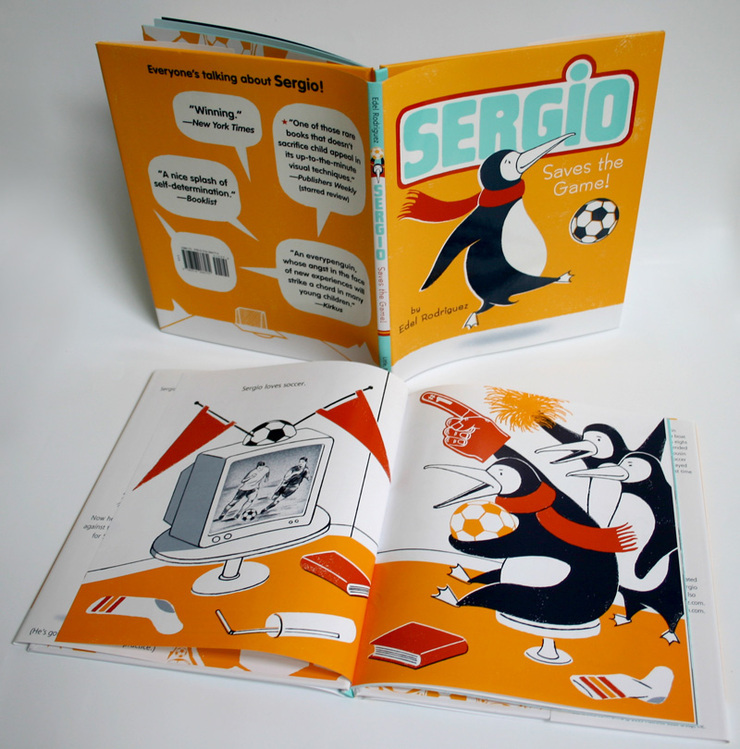 Sergio Saves the Game! is available at:

Go to INDIEBOUND.ORG for independent bookstores in your area

Below is a video interview about my kids' books: 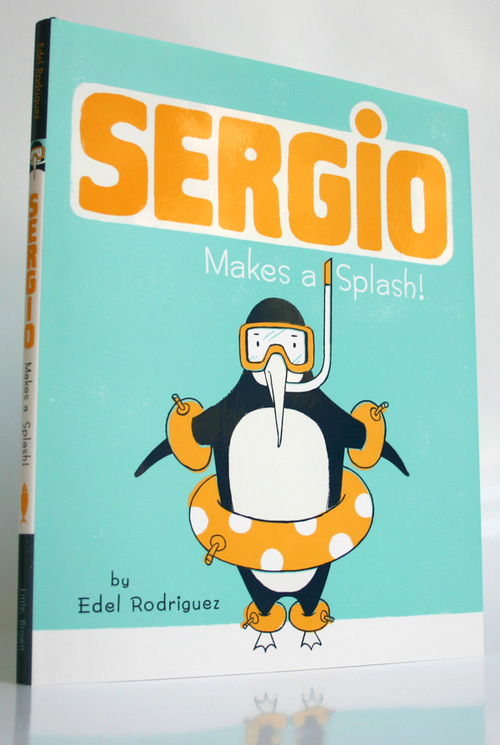 This is the first time I’ve both written and illustrated a kids’ book.  I started working on the story about five years ago when I noticed how funny and hesitant kids were about swimming and jumping into pools.  The entire book is printed in three color Pantone inks which makes the colors really pop.  I’m very happy with the way the printing turned out. There is more information below, along with a few reviews which give a good idea of what the book's story is about. 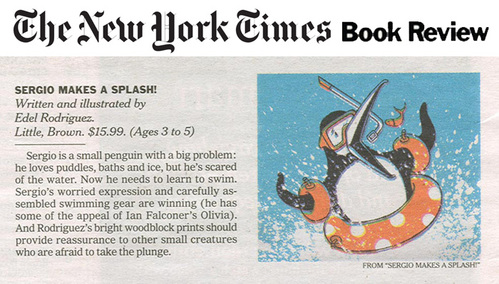 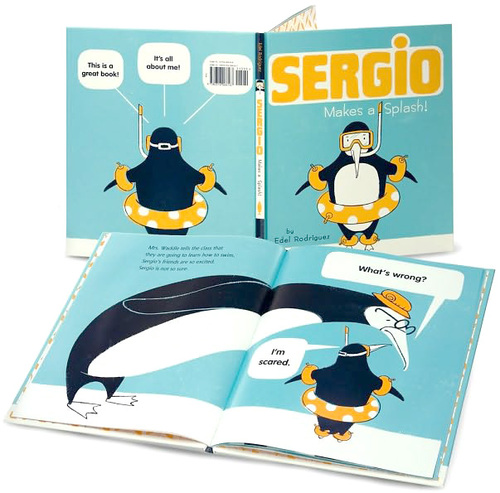 Publisher’s Weekly (Starred Review):
"Sergio the penguin isn't afraid of all water—just “the very deep kind.” But with the help of floaties, a snorkel, a life preserver, he discovers that taking the plunge isn't so bad after all. A penguin with a fear of swimming is both a comic and a useful premise—plenty of similarly haunted readers will want to laugh at Rodriguez's (Float Like a Butterfly) sympathetic presentation, and his illustrations guarantee that they'll be able to share the fun, too. Rendered in a minimalist, three-color palette (aqua, midnight blue and orange), these mostly full-spread images each pack a poster-like punch (Rodriguez is an acclaimed poster designer as well as a former Time art director). He finds occasions for jokes (on the walls of Sergio's bedroom hang framed portraits of other black-and-white creatures: cow, Dalmatian, panda, zebra, soccer player), creates dynamic vignettes and makes even Sergio's back look expressive. One of those rare books that doesn't sacrifice child appeal in its embrace of up-to-the-minute visual techniques. Ages 3–6. 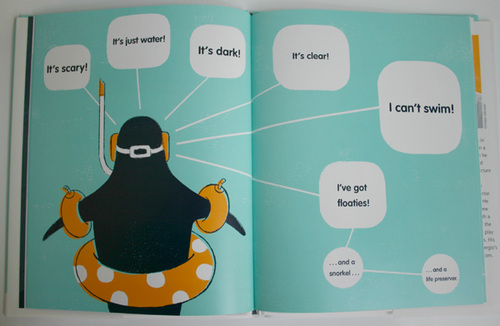 Kirkus Reviews:
"Sergio the Argentinian penguin loves drinking, splashing and playing with water, but he can't swim-which makes for some anxious moments when his class takes a field trip to the ocean. Screwing his courage to the sticking place after agonies of indecision ("It's scary!" "It's just water!" "It's dark!" "It's clear!"), he tumbles clumsily down the cliff and with a huge splash disappears completely. Using pale, thinly applied woodblock inks and digital media, Rodriguez creates very simple-looking scenes featuring a tubby, long-beaked penguin (outfitted with snorkel, goggles and floaties on both wings) diving into a glassy turquoise sea.Eventually Sergio rises with another mighty splash and proceeds to have a ball. Maybe next time he'll leave off the floaties? "Sergio will have to think about that . . . ." Sergio comes with his own website, but a celebrity like Olivia he's not-more of an everypenguin, whose angst in the face of new experiences will strike a chord in many young children." 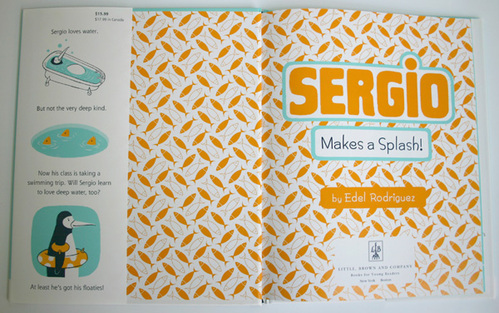 School Library Journal:
"A young penguin loves water-to bathe, drink, and splash in-but he does not want to learn to swim in the ocean. When his class takes a trip for their first lessons, Sergio has his floaties, mask, and snorkel but still fears to take the plunge. With the supportive encouragement of his friends, the little creature finally makes the leap and, in the satisfying conclusion, finds that he quite enjoys himself. Beginning with the stylized goldfish on the endpapers, the simple woodblock and digital art is stunningly rendered in bright orange, stark white, and cool aquamarine. Rodriquez uses bold graphics, lines, and angles to create a sense of play and space that draws in readers. The text is great fun for storytimes or for reading alone. Kids will take to this visually pleasing tale like ducks...er, penguins, to water." -Marge Loch-Wouters, Menasha Public Library, WI 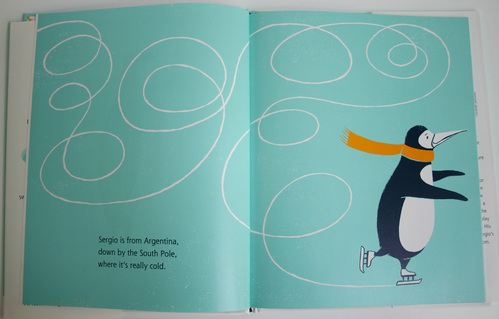 Shelf Awareness Review:
"What does one do with a bird born to swim who won't? Why, encourage him to overcome his anxiety, of course! As Sergio's penguin peers coax him to come on in, the water's fine, youngsters will feel the lure, too. A palette of just four colors--black and white, naturally; a blue that children will instantly recognize as the chlorine-tinted color of their backyard and neighborhood pools, and life-preserver orange--lends the tale a retro feel despite its timeless topic, and suggests that this has been a struggle for generations of timid swimmers. In the first picture book he has both written and illustrated, Rodriguez (Oye, Celia!; Float Like a Butterfly) gets the pacing just right, as he shows the penguin's pals enumerating the things he loves ("fishies, . . . a cold bath"), all of which may be found in the depths of the Antarctic Ocean. In the tense moment after Sergio takes the plunge, the penguin hero is completely submerged, with nary a bubble as evidence of his presence on the full-bleed spread of pristine pool-blue; only a small orange sun in the upper right corner presides over the scene (as, offstage, "Sergio's friends and Mrs. Waddle watch and wait"). In the next spread, Sergio surfaces in a cascade of froth. Children will identify with the hesitant penguin's fear and cheer him on as he conquers it in triumph."  --Jennifer M. Brown 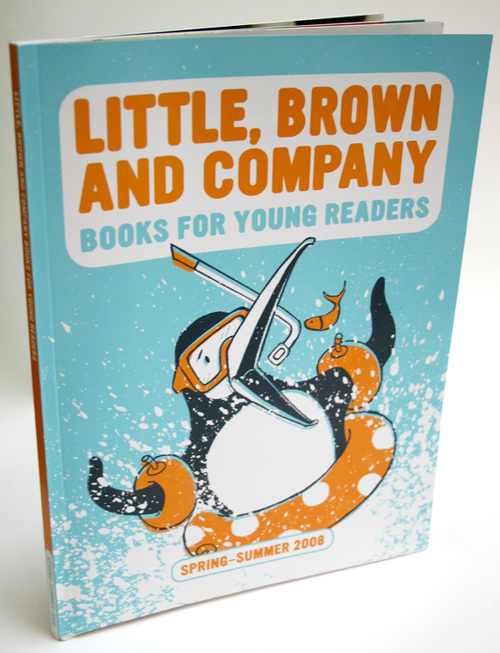 Sergio has been getting a lot of great support from the editors and publishers at Little Brown.  They selected him for the cover of their Spring catalogue! 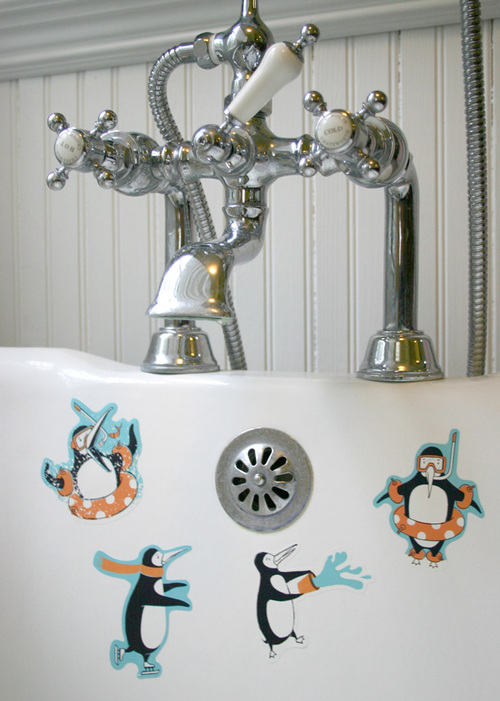 The crew at Little Brown even printed little bath stickers to give out at events. 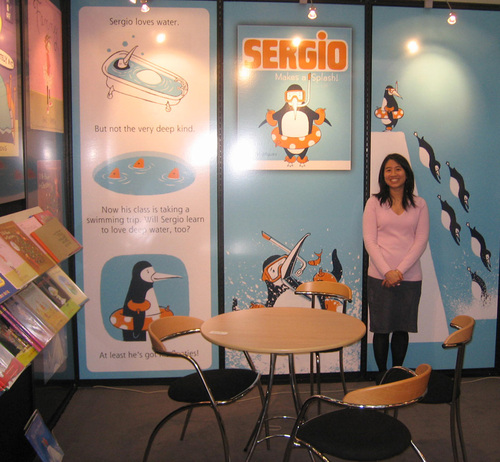 Sergio in Italy!  This is my editor Alvina Ling at Little Brown's booth in the Bologna Iinternational Children's Book Fair.  Sergio is being published in several languages, the book has been picked up by publishers in Korea, Japan, Holland and France.

Sergio and Edel were featured in The Miami Herald.  Read the full article online here. 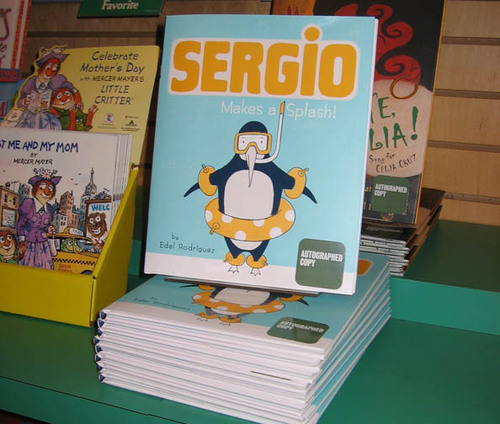 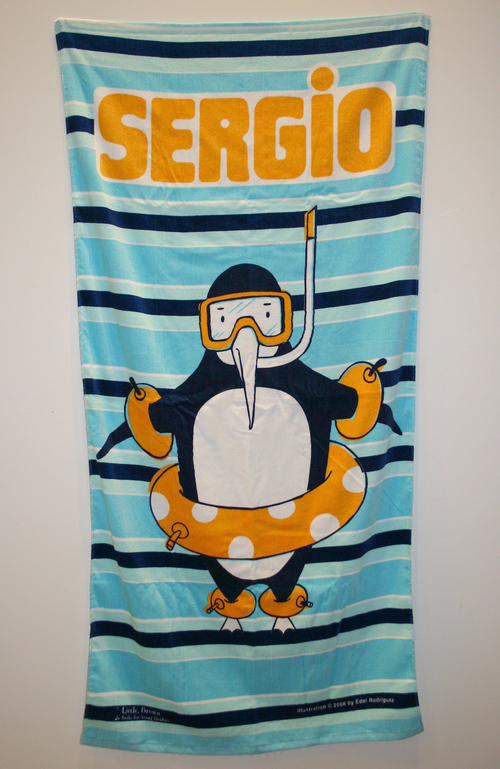